In 2017 Pascoe Archaeology was commissioned by Historic England to conduct a multi-beam echo sounder survey (MBES) over the site. The surveys were conducted in March 2017 by a collaborative team including Pascoe Archaeology, MSDS Marine and Swathe Services. The survey vessel, Predator, was provided by Predator Charters Marine Ltd. The results of the survey revealed that the site was once again exposed with significant amounts of archaeological material emerging from beneath the sands.

The team returned to the site in April 2018 to conduct a survey to identify any changes. Regular surveys are essential on the Goodwin Sands as the local bedforms and sand banks are extremely mobile and dynamic. Another survey would help determine whether the site was currently located in a region of the Goodwin Sands experiencing seabed erosion.

The results of the 2018 survey identified greater exposure of material on the main wreck mound and an area to the north had opened up. Several gun like anomalies were identified to the north. These anomalies could be associated with the Northumberland, or possibly, the sites of the Restoration and Mary, which are a few hundred metres to the north.

The further exposure of the site led Historic England to commission Pascoe Archaeology to conduct an underwater archaeological assessment to determine and identify what was currently exposed on the site.

The fieldwork was conducted between the 18-24 August 2018, by a collaborative team led by Pascoe Archaeology. MSDS Marine acted as the diving contractor and diving operations were conducted from the Dive Support Vessel (DSV), Neptune. The dive team consisted of members of MSDS Marine, Bournemouth University and Sea Dive Organisation.

There were several exciting new discoveries including a large assemblage of concreted swords, a group of pulley sheaves and one of the ship’s culverin chase guns. The latter still has the parts of the carriage cheeks attached. All of these finds are at the top of the site’s stratigraphy, which demonstrates its high archaeological potential. The progress of the fieldwork was documented on film by cameraman and producer Michael Pitts. Each day a new episode of the Northumberland Diaries was uploaded to YouTube.

Several key features on the main wreck mound were recorded photogrammetrically. The results of the photogrammetry were scaled and georeferenced in relation to the 2018 multi-beam bathymetry. This has produced the most up to date and accurate plan of the site to date. 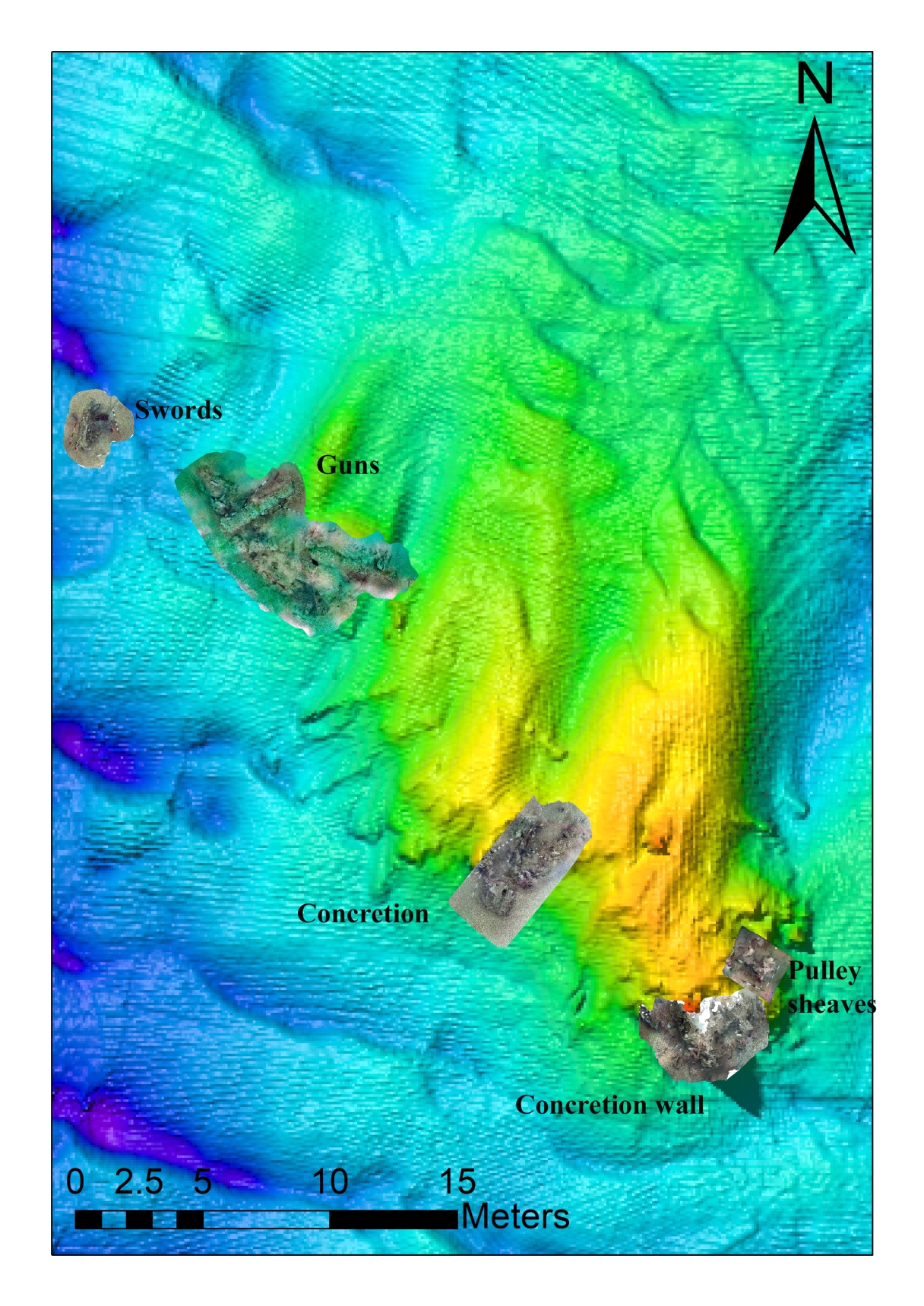 Orthophotomosaics of archaeological features captured from the photogrammetry have been scaled and georeferenced in relation to the 2018 multi-beam.

The interpretation of the exposed remains will start at the southeast end of the site and work systematically backwards to the extent of exposed features at the northwest end.

The highest point of the wreck mound is located at the southeast end and this can be clearly seen on the multi-beam bathymetry. Previous investigations had identified this as a concretion of iron shot (Pascoe et al 2015, 134), however, the current inspections have revealed a more complex feature. This feature is currently over 2m high and is a large concretion consisting of a variety of material and artefacts. Among the mass of concreted ferrous objects are a ceramic pot, a staved bucket, a lead scupper, several pulley sheaves and iron shot. Much more investigation is needed to fully understand this area of the site.

25 metres to the northwest of the large wall of concretion is a group of three guns. The guns are heavily concreted but their lengths and girths suggest they are from the main gundeck. Gun 3 is especially interesting for two reason. Firstly, it has partial remains of both cheeks of its carriage surviving. This is particularly surprising as it is located near the top of the site’s stratigraphy, and therefore, always exposed. What remains of the carriage has survived due to the concretion from the gun protecting it. The second detail is the length of Gun 3. It is over 11 feet long, which would make it one of the four culverin chase guns. The culverins were likely to be in the stern located on the broadside but moved to the stern ports when required.

Six metres northwest of the breech end of Gun 1 was a concreted feature with lots of linear features within it. These linear features were situated both horizontally and sticking up almost vertically from the seabed. The whole mass was entangled with trawl and potting line. The fishing gear had damaged a small section of the feature. The damaged piece was at risk and vulnerable to loss and was therefore recovered. On closer inspection, following recovery, it was possible to see the shapes of three blades. Also, at the cross section, where it had broken away, it was possible to make out the remains of wood and leather scabbards.

The recovery of this small piece had helped identify that the concreted feature on the seabed was a large assemblage of swords. The whole feature is 2m long by 1.3m wide and up to 1m above the seabed. From the size of the concretion and the number of linear shapes within it, there could be dozens of swords contained within this concretion. The fragment of concretion has recently been X-rayed by Historic England. The results revealed a surprise concealed within. As well as the blade ends, five metallic buttons were observed. The buttons were all in a line suggesting they were once attached to a piece of clothing. The concretion is now with a conservation student at Cardiff University, where it is being carefully de-concreted and analysed.